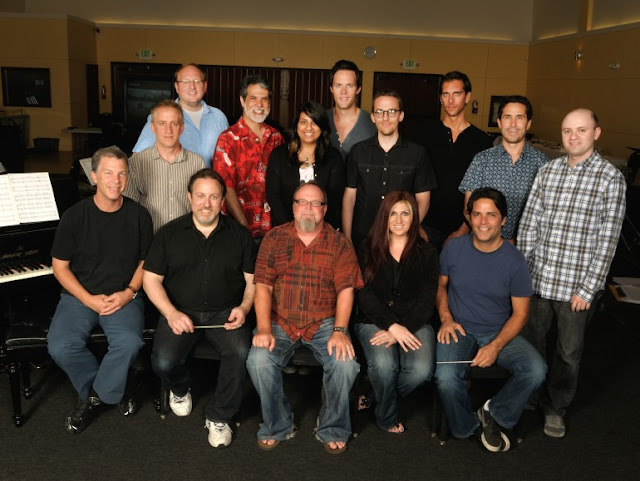 THE SIMPSONS is currently on post-production hiatus until mid-August, so I get to work on other projects during the summer. For the past fifteen summers (and now a sixteenth this year) I have been the music editor for the BMI Conductors’ Workshop. The photo above is from the 2012 workshop.

BMI & ASCAP are the two performing rights societies in the U.S.A. that represent composers (film composers, song writers, lyricists, etc.) and their primary function is to collect performance fees from the major studios, TV networks, restaurants, elevators, any place where copyrighted music is played publicly. Then, in turn, they distribute those fees to their composer members in the form of royalties. In the world of TV scoring, this is the largest source of income for composers. They are paid a fixed fee (an ever-shrinking fixed fee) for composing the music, but when it plays on TV in first-run and in subsequent syndicated reruns, they receive additional royalty payments based on the number of minutes of music played. The royalty pay scales vary depending on a number of factors – network TV music pays more than cable TV; if a cue is “featured”, meaning that the music is the focal point of the scene (a dance scene, a live singer, etc.) it pays more than if the music were underscore. If you are an up-and-coming composer and want to learn more, click here to visit the BMI website or click here to visit the ASCAP website.

Besides collecting and distributing money, BMI & ASCAP offer their members all types of advice, classes, and workshops to help them advance their careers. Since 1998 BMI has offered its film composers the opportunity to learn orchestral conducting. This is a valuable skill for a film composer as many composers conduct their own music at the recording session, but many younger (and some veteran) composers have never stood on the podium in front of a symphony-sized orchestra. It can be a very daunting experience. Every year, BMI selects eight (it used to be ten, but they scaled back to give more personal instruction) composers to participate in the conductors’ workshop where they learn all the basics of conducting. Over the two-week course they start out conducting just a pianist. Then session by session, they lead larger and larger groups culminating with a final big session with a 40-piece orchestra. As I write this post, I am sitting on the Warner Bros. Eastwood Scoring Stage listening to and working with this year’s crop of students as they lead a fabulous studio orchestra.

The teacher of the workshop for all sixteen years of its existence is Lucas Richman. Lucas is currently Music Director for both the Knoxville Symphony Orchestra in Tennessee and the Bangor Symphony Orchestra in Maine. Two years from now he will be conducting full-time in Bangor. He’s a great teacher, inventive composer in his own right, and conductor extraordinaire who spent many years conducting film scores in Hollywood (“The Village”, “Se7en”, “As Good As It Gets” to name a few) before taking the job in Knoxville in 2003. I’m proud to call him a colleague and a friend. Read more about Lucas by clicking here.

The composer-students get to conduct all types of orchestral works ranging from chamber works by Copland and Mascagni to larger symphonic works by Beethoven and Rossini all the way up to big film scores by Jerry Goldsmith and Alan Silvestri.

I always have a lot of fun being a part of the workshop every year because I get to wear the dual hats of music editor and conductor. I coordinate all the film score cues by preparing the picture, the click tracks, and the Auricle programming. Lucas does all the conducting coaching and teaching, and I’m able to lend the perspective of a music editor with formal conducting training. It’s been a wonderful and fun opportunity for me to meet new composers and hear more fantastic live music played by the greatest musicians working today.

I took some photos during this year’s workshop for you to enjoy. Scroll down and click on any photo to see a larger view and to browse through the collection.

New episodes of THE SIMPSONS are scheduled to return in late September and I’m due back at the first music spotting of the 25th season in mid-August. I’ll be posting more musical musings between now and then.