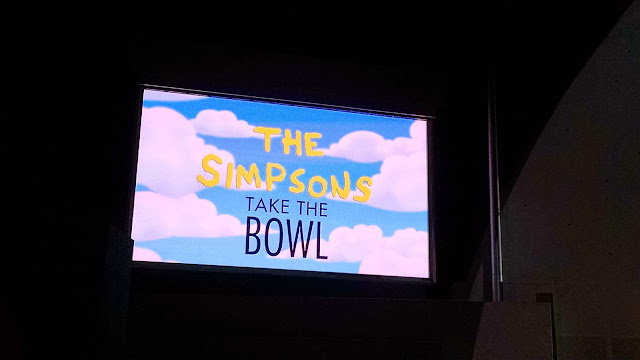 Right around August 1st, 2014 Alf called me to say that he had been asked by Al Jean to participate in the upcoming THE SIMPSONS TAKE THE BOWL concert being planned for The Hollywood Bowl to celebrate the 25th anniversary of the show. The producers wanted Alf to conduct some of his music and they wanted to bounce various ideas around to pick which music they would use. By this time it had already been announced in the press that various cast members and guest stars would be singing in the show with The Hollywood Bowl Orchestra conducted by Thomas Wilkins. Alf was being invited to present some of his music in a segment paying tribute to his musical legacy on the show.

Alf called to tell me about it and to ask for my input on possible cues or songs that he could conduct. We talked through a few possibilities and Alf said he would sleep on them and decide soon. Then on August 7th, I got a very unexpected call from Alf. He said that after giving the invitation thoughtful consideration, he was going to bow out of conducting at the concert.

A few years back, Alf came down with a case of “frozen shoulder“, a mysterious ailment that orthopedic doctors don’t fully understand. The main symptom is exactly what it sounds like – your shoulder locks up, limiting range of motion in the arm to around 20% of normal. No one seems to know exactly what causes it and there is no cure other than time for it to “thaw”. Thawing can take 18-24 months. While Alf’s shoulder isn’t “frozen” any more, it hasn’t fully “thawed” either. As a result, he hasn’t been conducting at scoring sessions these past few years. Orchestrator Dell Hake has been handling that job beautifully and Alf has moved into the control room, listening to takes and giving notes as we record the sessions. Alf felt that a week of conducting that would include rehearsals and performances was just a bit much given his shoulder condition. He asked Al Jean to keep the tribute segment in the program and recommended that I conduct the orchestra in his place. Al ran the request up the chain of command, everyone approved, and I got the gig. 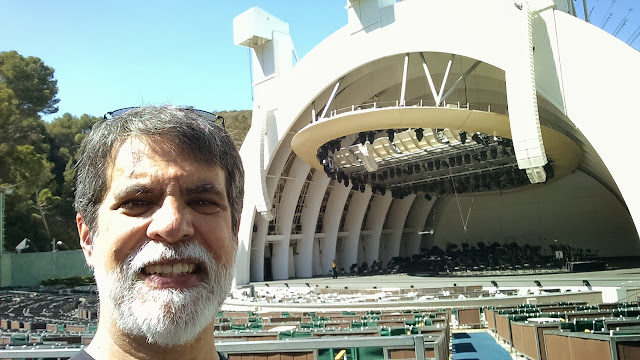 Alf was vary aware of my conducting education and ambition. I was so honored that he would entrust me with this once-in-a-lifetime privilege. We talked some more and settled on a medley of some of his well-known themes combined with instrumental arrangements of some of his songs from various musical episodes. I assembled a medley that would run about six-and-a-half minutes. Alf and Al approved the music and next came working out the preparation of the score with the music library and the music supervisor for the show, Jim Dooley.

Some of the music we selected dated back to the third season of the show, but our fabulous music library – JoAnn kane Music Service – has everything saved and stored at their facility and they were able to pull all the scores I needed, convert the older, hand-written ones to a digital format, and combine them with the newer, already digital scores into one, fantastic, beautiful score.

The first rehearsal was scheduled for Sunday, September 7th starting at 7:30PM. This would be a “walk-through” rehearsal for the purpose of everyone learning their entrances and exits, running through the dialogue, and learning the choreography for the “Do the Bartman” finalé – no orchestra, no singing during this rehearsal. The rehearsal ran longer than expected and we finished around 11:00PM. On my way home I received an email from Al Jean saying that the medley needed to be cut in half. I was very surprised and a bit heartbroken that such a change would be made before I even had a chance to rehearse it with the orchestra, but the medley wasn’t the only casualty. Jokes and dialog got cut, some animation specially created for the concert got cut, one of Beverly D’Angelo’s and one of John Lovitz’s songs got cut. The changes made for a more fast-paced, vaudeville-style musical review show.

So Monday morning I started re-editing the medley and sending it off for approval. Once approved, all the orchestra parts had to be revised to reflect the new version. Then I arrived back at the Bowl on Wednesday evening, September 10th to lead my first rehearsal. The medley was scheduled for the second half of the second half of the show, so I had quite a bit of time to cool my heels and wait my turn. Finally, around 9:20PM, Master of Ceremonies Hank Azaria introduced me, I walked onto the legendary Bowl stage, and performed the small comedy bit that had been written for me. I was supposed to walk onto the stage in regular street clothes, looking a bit bewildered at what I was doing there. Then a couple of the Duff Girl Dancers ripped off my street clothes revealing my fancy tux underneath, magically transforming me into a ready-to-go conductor. Our costume designer for the show, Kathryn McRitchie had worked for a couple of weeks preparing the breakaway clothes and fitting it perfectly over my tux so that I didn’t look too “puffy” in the over-sized shirt and pants. They ripped away perfectly and the bit went exactly as planned – and then it was cut for time. I felt so bad for Kathryn after all the work she did, but she was very well represented with all her other costumes in the show.

My first rehearsal was amazing. It was everything I could have ever hoped for leading the world-class group of musicians that they are. For those of you not familiar with The Hollywood Bowl Orchestra, in its current incarnation it is an orchestra made up primarily of studio musicians whose day job is working on the movies, TV shows, and records that you all know and love. The orchestra was formed in 1991 to play the weekend “pops” concerts leaving the “legit” classical concerts during the week to the Los Angeles Philharmonic. 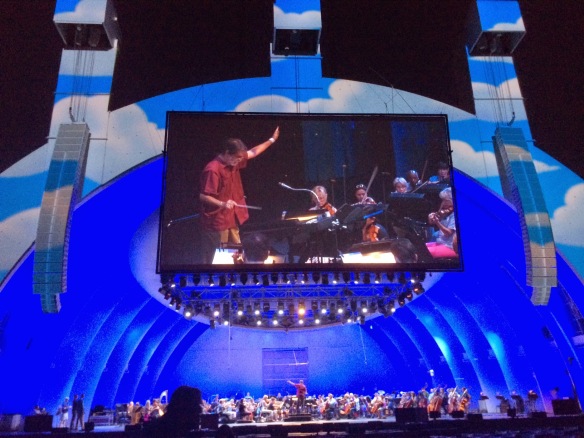 The rehearsal went off without a hitch thanks to the combined efforts of JoAnn Kane’s people and Stephen Biagini’s crew with the Los Angeles Philharmonic’s library services. Amazing. Without their help, I would have spent all my rehearsal time telling the orchestra what cuts had been made. I am totally indebted to them for their über-professional work.

We ended rehearsal on time, then went home to have Thursday off before one last rehearsal on Friday afternoon, just a few hours before the first performance on Friday evening. All the details on the weekend coming soon … stay tuned. 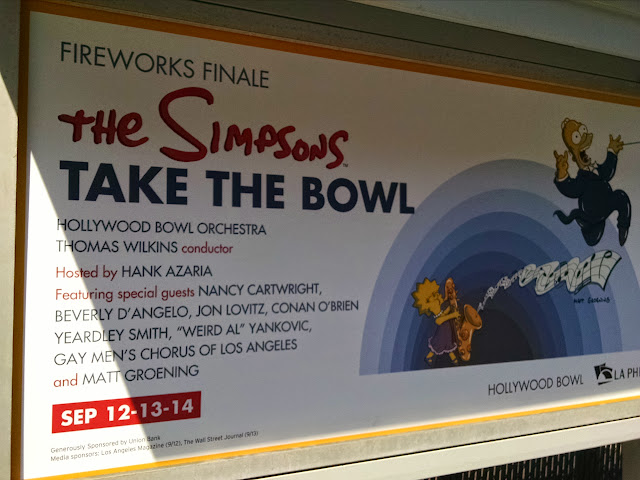 Regular readers of this blog may remember my post from November, 2011 which tells how I got started in music as a child and my ambition to conduct professionally. Well, you can file this post under “Good Things Come To Those Who Wait” (and learn, and show up for work on time, and do their jobs correctly.)

I will be conducting The Hollywood Bowl Orchestra for a small but important portion of THE SIMPSONS TAKE THE BOWL on September 12-13-14, 2014. While, of course, much of the music to be performed those evenings was composed by Alf Clausen, my part of the concert will be devoted exclusively to Alf and his contributions to the musical legacy of THE SIMPSONS.

Alf asked me to do this for him. Honored, humbled, and excited are three words that come to mind to describe how I feel about this privilege, and they are woefully lacking in descriptive power. I cannot thank Alf enough for this opportunity and for the trust he has placed in my hands to represent him and his music.

I can’t believe I’ll be musically representing the greatest cartoon of the past 25 years at the same historic venue where cartoon greats Bugs Bunny and Tom & Jerry have conducted before me! 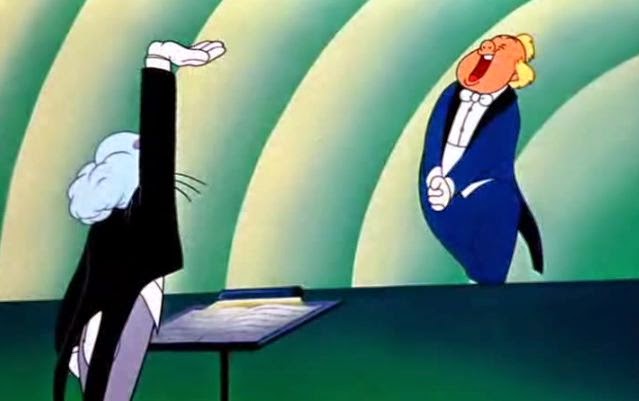 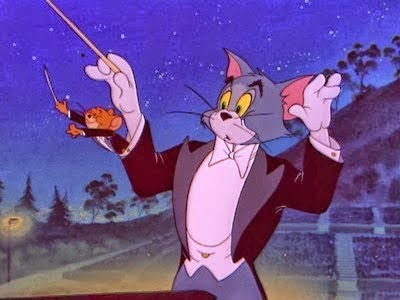 So spread the word and if you are in the Los Angeles area any of those three nights, please come to one of the concerts and tweet me @mxedtr to let me know you’re there.

Of course, I’ll be documenting the experience as much as I can and will post a long, gushing, self-congratulatory blog when it’s all in the rear-view mirror. 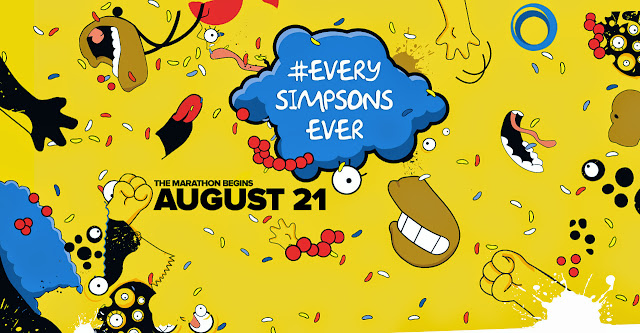 It’s so exciting to see so many people so excited for the marathon.

To any of you new to the blog, thank you for finding me. To my readers who have been missing my posts of late, I can only say I’m sorry for the small trickle of words this past year, but I attribute it to a combination of being very busy with the show from February to May – we scored and aired 12 shows in 11 weeks owing to the Olympics, Grammys, and Oscars all preempting us – and needing a little blog break after producing many more posts than I thought I had in me.

I awoke this morning to a Twitter feed ablaze with posts mentioning and celebrating the marathon. I also found a twitter link to this article from NPR’s Deceptive Cadence blog. What an honor and thrill to know that NPR is reading my blog! Many, many thanks to NPR and to the readers who have found their way here thanks to the article.

Sidebar: The official Twitter account for the marathon is @EverySimpsons and my account is @mxedtr. I’ll be live-tweeting here and there throughout the 12-day event (can’t possibly be there the ENTIRE time, but I’ll be adding anecdotes when I can).

This post has to be a brief one this time around because I’m getting ready for tomorrow’s scoring session for SABF20 CLOWN IN THE DUMPS, our Season 26 premier episode which is set to air on Sunday, September 28, 2014 on FOX.

I’m also working on The Simpsons Take the Bowl concert performance. I can’t reveal any details now, but to be sure, there WILL be a blog post (or two) about it when it’s over. If you are in the Los Angeles area on September 12-13-14, 2014 try to attend the live concert. It will be a pretty amazing night of music, guest stars, and Simpsons-style fun.