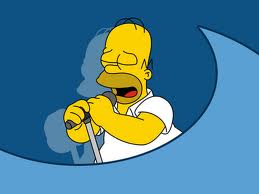 In my most recent post I mentioned that I was about to work on a “secret song” with Dan Castellaneta this past Monday.

On Monday morning, I went into my home studio, placed a phone call to the Marge Simpson ADR stage (most all of the dialogue for the show is recorded on this stage), and was patched through to Dan’s headphones as he stood by for directions. Eight takes later, we called it a “wrap” and all the audio files were sent to me over the Internet. That afternoon I edited a couple of different versions and sent them to Al jean for approval.

Then later that day I received a call from our editor Mike Bridge and he told me that Jim Brooks had made a few changes and asked if I could re-edit the music to accommodate those changes. I made and sent the changes, then a couple of hours later Larina Adamson called to say that everything was approved and that I was finished editing.

The one behind-the-scenes tidbit I’ll share is that the vocal you hear in the final version is a blend of the new lyrics Dan recorded on Monday and old lyrics Dan recorded back in 2002. Thank goodness for well-archived tape and a thorough database that allowed me to quickly cobble together all the elements into the finished product. Everyone was pretty happy with it and I’m proud to have done my part.

Click here to view the “secret song” video and leave me a comment telling me what you think.