After working nearly non-stop since mid-October, this week slows down a little as we head into the Christmas/New Year’s period. We’ve been having many “finals” of late… last Friday we had our final scoring session of 2011 for PABF03 “Politically Inept, With Homer Simpson”; tonight (Tuesday, 12/13/11) we’ll have our final dub of the year working on “Politically Inept”; later this week We’ll have our final music spotting session for 2011 as we begin work on PABF04 “The D’oh-cial Network”. More details on that episode next time, after I’ve spotted it. 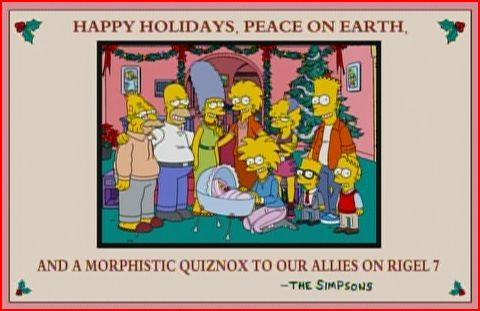 There has been a lot of positive response on the ‘net to NABF18 “Holidays of Future Passed”. I have always enjoyed the writers’ takes on how our favorite family will evolve (devolve?) in future years. Of course most fans point to 2F15 “Lisa’s Wedding” as the best and strongest example of this type of episode and I’d have to agree. Hard to believe it’s been nearly sixteen years since that episode first aired. Did you all enjoy the End Credits Simpsons Theme/Christmas Carol mashup? That was Al Jean’s idea and Alf’s witty and excellently-crafted arrangement. We also had a lot of fun recording the “future” version of the Itchy & Scratchy Theme. More serious with a big choir singing.

For me – and for many longtime fans, I’d suspect – what makes this episode so good is the blending of very funny gags and observations regarding the future with a story that brings us back to the heart of the family. When the show first started airing in the ’90s and friends and family would complain to me about Bart’s smart-ass antics, I’d try to defend the show by pointing out that its core belief system revolved around family values and the fact that no matter how mischievous Bart was or how doltish Homer was, The Simpsons all loved each other and would do anything to protect each other. Those sentiments were expressed by all the family members in “Holidays of Future Passed”. 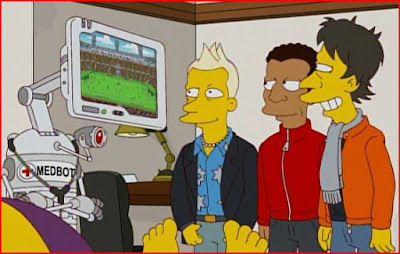 Before I forget, in my last post I teased that there was a cameo guest voice during the soccer match about five minutes into the show. Who was the mystery actor yelling: “GOOOOOAAAAAAALLL!”? None other than Matt Groening. At the dubbing session there were only sounds of crowd cheering during that shot and Matt said we needed to spice it up somehow. After a few ideas bounced around the room, it was decided that we needed an announcer to yell “GOOOOOAAAAAAALLL!” Then came the question of who would do it. We all wanted Matt to do it, so he marched up to a microphone and in two takes we had our newest sports announcer.

That’s it for now. I’ll just make this a quick blog update. I’ll fit in one more post after we’ve spotted “The D’oh-cial Network” and that will be the last last for 2011.

Thanks for stopping by.