During summer hiatus I received an email from Film Roman with a link to a video file and a request for me to watch the video, to make some musical suggestions, and to polish and edit the temp music track. When I opened the file, the entire sequence was still in the animatic stage, but I immediately recognized what it was that we were doing and I was very excited to get to work on this new project.

Sidebar: I don’t think I’ve ever mentioned what an animatic is. The simplest explanation is that it’s a film (or digital video these days) version of the storyboard. What’s a storyboard? OK, animation fans & geeks can skip ahead … for the rest of you, a storyboard of each episode is created before full animation begins. The storyboard resembles a comic book version of the episode, with the images roughly drawn in pencil and the dialog and action taken from the script and written into the drawings. 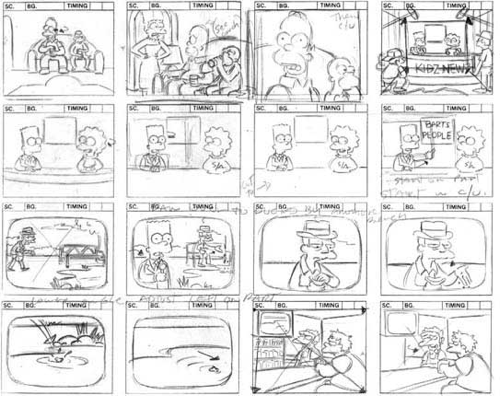 With the storyboard the director, writers and animators, Al Jean & Matt Groening can get a feel for the look of the episode before full blown animation. Once the storyboard is approved, then the images are cleaned up and filmed (or videoed) with the actual dialog from the actors’ recording put in as well as some temporary sound effects and music. Sometimes, there might even be some rough animation thrown into an animatic so that everyone can visualize a particularly tricky or complex sequence. Based on the animatic screening, rewriting and editing begins and then color animation commences.

When I saw the animatic, I immediately recognized that we were doing a large-scale parody of a Disney “Silly Symphony” cartoon from 1935 entitled “Music Land”. The Disney cartoon was a reimagined telling of the “Romeo and Juliet” tale through music. Instead of the Montagues and the Capulets, our star-crossed lovers are a violin from the Land of Symphony (Juliet) and a saxophone from the Isle of Jazz (Romeo). The entire story is told through music with no dialog and minimal sound effects. It’s a very clever take on the Shakespeare play with beautiful animation and blending of music that was still five years ahead of Fantasia at the time of release.

Our version would be similar, but not a love story. Rather, it’s a story of censorship versus freedom of expression. “Music Ville” is ruled by Mr. Burns the Bassoon and he demands that only classical music be played. Lisa the Baritone Saxophone promotes musical diversity, especially where her beloved jazz is concerned. Her “crime” gets her and her entire family – Bart the Trumpet, Marge the Trombone, Homer the Tuba, and Maggie the French Horn – arrested and chained to the wall in a dungeon where they are forced to listen to classical music until Lisa & Bart break into a joyous jazz improvisational duet which breaks their chains. All the other types of music in Music Ville overthrow Burns and all the instruments of the land celebrate with a rousing, jazzy version of The Simpsons theme to close out the sequence.

Before coming to work on THE SIMPSONS 25 years ago, I was (and still am) a huge fan of the art of animation. Around the age of 15 I discovered that the classic “cartoons” of Disney, Warner Bros., and MGM were also great works of art. As a hobby I started reading books about animation technique, the artists who created the amazing characters and backgrounds and special effects, and the histories of the various studios that produced them. Two of the best books I can recommend on the subject are “Of Mice and Magic” by Leonard Maltin and “The Illusion of Life” by Frank Thomas and Ollie Johnston.

Of course the names that received the big credit up front at the beginning of each cartoon – Walt Disney, Fred Quimby, Leon Schlesinger – were not the artists doing the work, but the figureheads who ran the animation departments at each of the studios. In fairness, Walt Disney did have some drawing talent and was certainly the driving creative force behind everything that came from his studio, but he was never a top animator at his own studio for any of the shorts or features he produced.

The “Silly Symphony” series from the Disney Studios were the first cartoons to be filmed in Technicolor and the first to integrate music into the story-telling process, not just adding plunks and booms to emphasize slapstick action. “Music Land”, directed by Wilfred Jackson, used music as the sole sound for telling the story. Not just long stretches of classical and jazz music, but clever solo violin and saxophone sounds to emulate spoken words coming from the main characters.

Our version, “Music Ville”, directed by Mark Kirkland, also uses wall-to-wall music, a handful of sound effects, and no dialog to tell the story. It also very cleverly casts the citizens of Springfield as their appropriate musical instrument alter egos – Apu the Sitar, Barney the Tubby Drunk Tuba, Disco Stu the DJ, Cletus’s family as a hillbilly jug band, Willie as Bagpipes, Sideshow Mel as a Slidewhistle, etc. 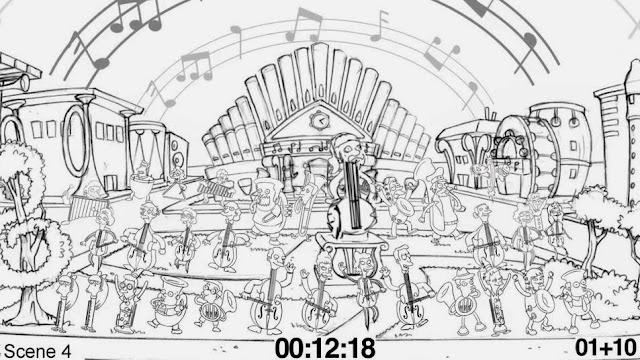 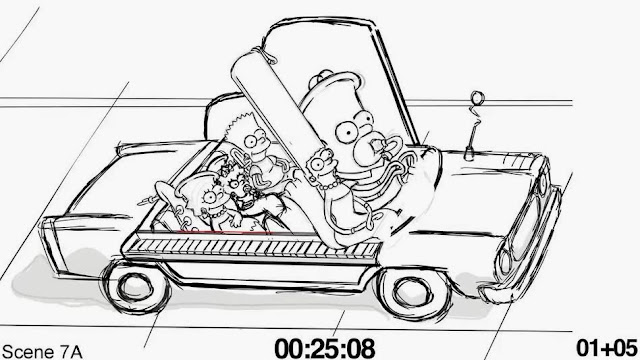 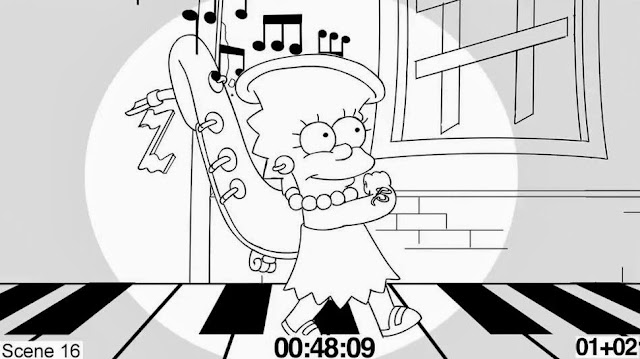 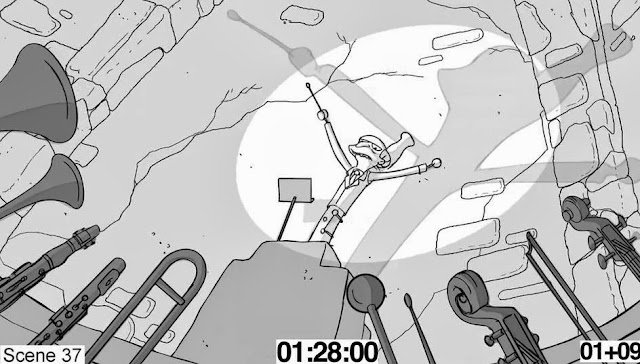 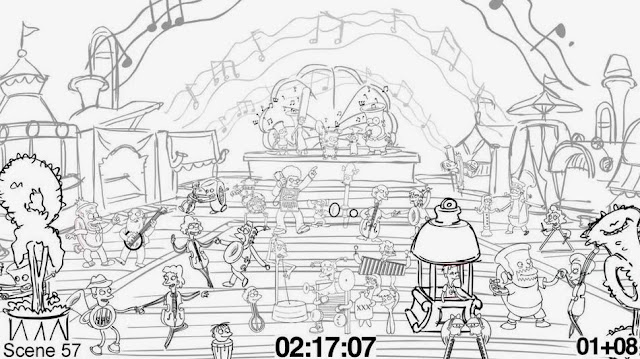 I was so excited to see this work-in-progress and appreciated its own artistic statement as well as the homage to the Disney short. I did my usual re-editing of the existing music track plus made a few suggestions of my own to make Mr. Burns the Bassoon more menacing. The picture went back and forth between me and Film Roman a couple more times and then I didn’t hear anything more until early October when I was sent the color animation. Seeing the finished animation in full color and high definition was so gratifying and sensational. I immediately emailed Al Jean congratulating him and the team for producing this stand-out sequence. Then I followed up with the usual important question: “Is this locked?” The answer, of course, was “no”. But, there were only two very minor tweaks and then it was locked for good.

Time to loop Alf Clausen into the conversation. Well, actually, I wish Alf had been looped in long before. I have mentioned elsewhere on this blog that we do things a little backward most of the time here on THE SIMPSONS when it comes to music. All those classic cartoons from Warners and Disney and MGM had their musical score composed and recorded before animation so that the timing of the picture to the music was spot on and so that some of the characters’ emotions were motivated by the music. But remember, those classic cartoons were produced one at a time, with many weeks of work going into them, so they had the luxury of a longer schedule. We produce 22 episodes per year, so our schedule is very compressed. So, instead of Alf composing and recording the music based on the storyboards so that the music could be included in the animatic, it was all done with temp music – first edited by Film Roman, then by yours truly. I filled Alf in on all the particulars and advised him that if we could fit it in, it would be in all of our best interests to start recording the music ASAP and to not wait for the scoring session for that episode. That turned out to be a good idea.

It ended up that we recorded over 40 different bits of music over 3 different scoring sessions for “Music Ville” ranging from 30-second passages of Mozart and Grieg, to 15-second stretches of original jazz music by Alf, down to 1 second bursts of brass, bagpipes, drums, accordion, sleigh bells, and other assorted musical sounds. On the final of those 3 sessions, we spent nearly 3 hours of recording and playback time on just “Music Ville” before we could move on to the rest of the score for episode SABF02!

Once again, I took over the timing and editing (on paper) of the classical music that would be in “Music Ville”. We used Mozart’s 28th Symphony, and a passage from Grieg’s “Peer Gynt” (a favorite of Matt Groening’s and used at his request). I cut an existing recording of these pieces into the picture, then told Alf what bars and what tempo to use so that they would sync to picture properly. Alf went off and composed some new jazz tunes plus the various solo instruments that would “over-lay” the jazz (the sitar, the tuba, etc.).

We were even able to sneak in a motif we have used in the past on the show known as “Release the Hounds”. Whenever Burns sets his hounds on any intruders, this music plays during the ensuing chase. In “Music Ville” the hounds are a pack of angry vibraphones, so Alf used his motif with the orchestra as usual but with vibraphones leading the way as they chase Lisa into a dark alley.

All in all, I am very proud of “Music Ville” and the part I had in helping shape it. I even got a nice congratulatory shout-out from our Director Emeritus, David Silverman. 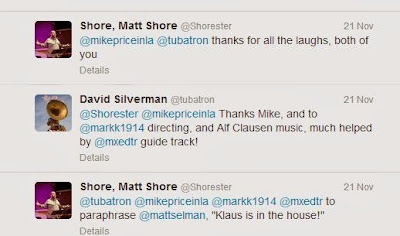 Also, David tweeted out some of his original model sketches for “Music Ville”. What a treat that he shared these! 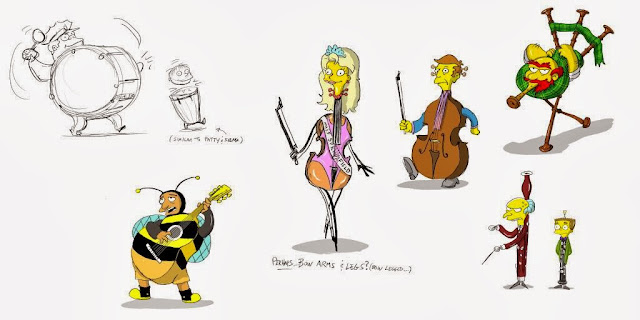 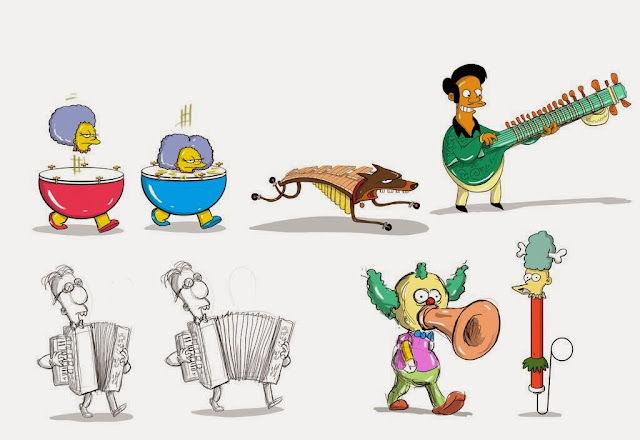 As I wrap up this post, I leave you with both cartoons for your enjoyment. First, “Music Land”, then “Music Ville”. I hope you enjoy them and can appreciate them for the wonderful works they are. Kudos to everyone involved from 1935 to 2013!