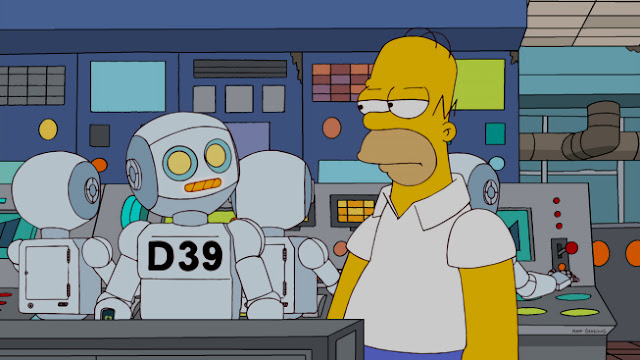 Episode 502 is in the books, so let me share a few thoughts and inside stories…

PABF08 “How I Wet Your Mother”

SIDEBAR: Back when Bill Oakley & Josh Weinstein were running the show, I wandered into the writers’ room one day. On the wall were hundreds of 3×5 cards with two or three words on each of them, giving ideas for stories. One of them read “Homer’s mother”. I was excited by that idea and asked Bill Oakley if the part of the mother had been cast. He said “not yet” and rattled off a few names. I then suggested Glenn Close as a good possibility. He nodded agreement and I heard nothing about it again. A year later, at music spotting for the episode, I heard the voice of Homer’s mother and immediately recognized it as Glenn Close’s. I reminded Bill of our meeting in the writers’ room and he had no memory of our conversation. Hmmmm. How con-VEEEEEN-ient! So, when I got to direct Ms. Close singing “Dream Operator” I took a moment and told her my story. She agreed that it was con-VEEEEEN-ient that I received no credit for suggesting her for the part and has agreed to let me retain Patty Hewes to force Mr. Oakley to admit that I was instrumental in her casting (you have to be a “Damages” fan to get the joke).

Well, we’re on to episode 503 already, PABF10 “Them, Robot” written by Michael Price. The show will air on FOX on Sunday, March 18, 2012. There will be another classical music work slipped into the episode (let’s see how many weeks in a row we can keep this up). Guest voice for this episode is Brent Spiner straying not-too-terribly-far away from his days as Data on “Stark Trek: The Next Generation”. The scoring session for this episode took place yesterday (3/11/12) and it went very smoothly and we got some great cues with a lot of variety. As I write this, dubbing has started so we’ll be finished late Wednesday (3/13/12).

Every season the broadcast schedule has different unusual periods of many new episodes in a row or many weeks of no new episodes. After March 18, there won’t be a new SIMPSONS episode on FOX until Sunday, April 15, 2012. So finish up your taxes while watching the show … it’ll take some of the sting out of having to write a check.

Finally, a Twitter update – as of this writing I have 396 followers. Thanks to all my new followers and thanks to all of you who helped me to get there. I really appreciate it.

16 thoughts on “Finishing “How I Wet Your Mother” and starting “Them, Robot””