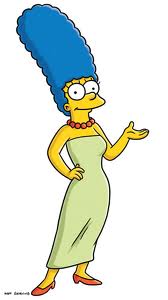 Firday, September 9 was a pretty busy day for yours truly. I spent pretty much the entire day at FOX working on 4 different episodes of THE SIMPSONS.

First up, directing Yeadley Smith as she sang a new song for the episode with guest star Lady Gaga. No, Gaga wasn’t there with us. She recorded her part for the show a couple of weeks ago, but Yeardley’s been away in New York for most of August and has just returned to L.A. so I was able to go into the studio with her to record her singing part for a special song in the show. More details as we get closer to the airdate next spring.

Then off to music-spot episode NABF20 “The Food Wife” with Alf, Larina, Dominique, Jesse and the episode’s writer Matt Selman. Marge, Bart & Lisa form a food-blogging team after stumbling onto a group of foodies enjoying Ethiopian food. Working on the blog together helps them to bond after Marge faces her jealousy over Homer always being seen by the kids as “fun Dad”. Anthony Bourdain is one of a few surprise culinary guest stars on the episode. As for the music, the show will have 13 score cues, 9 source cues, and 1 special song for a total of 23 cues running just over 6 minutes. The episode is currently scheduled to debut on FOX on Sunday, October 9, 2011. It will be the 3rd episode of season 23, episode 489 November 13, 2011. It will be the 5th episode of season 23, episode 491 on the way to 500.

After a short break, it was off to the scoring stage to record the score for NABF17 “Bart Stops to Smell the Roosevelts.” In addition to getting all that music recorded, Alf was contacted during the week to compose a couple of songs and a couple of instrumentals as pre-records for PABF16. We wrapped the recording for NABF17 & PABF16 shortly after 7PM.

So, from now until Tuesday, I’ll be: preparing spotting & breakdown notes for NABF20, editing Yeardley’s performance for PABF14, editing and assembling the score for NABF17, editing and delivering the pre-records for PABF16, then dubbing and finishing NABF17.

Looks like the season is finally in full swing!

UPDATE on 11/7/11: Here’s a great article from New York Magazine interviewing Matt Selman about “The Food Wife” and giving some inside details. (Thanks for pointing me to this @Simpsononlogy!) And one more article from The Hollywood Reporter.

6 thoughts on “The Food Wife”