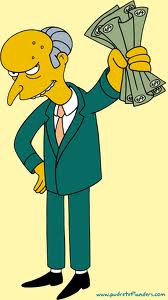 In my post on dubbing I showed you how I prepare a music cue sheet for the dubbing mixer to follow so he knows when and where the music will play in the show. I also pointed out that many terms in film making have multiple meanings. The music clearance cue sheet is different than the dubbing cue sheet.

The music clearance cue sheet is a list of all the music cues that ended up in the show, detailing who composed the cue, who the publisher (owner) is, how long it played in the soundtrack, and how it was used (more on that last one later). Back at step one we we had a spotting session to determine how many cues would be put into the show and how long each one would play. At the dubbing session the producers may (and often do) change the number or length of cues at the last moment. A cue can be shortened or extended, exchanged for another, newly added or removed altogether.

After the episode has aired I receive a DVD of the final version that was broadcast. I pop it into my computer, watch each scene while timing the music and noting how it was used. I enter all this information into a form I created in MS Word, then email the finished version to Alf Clausen and the Fox Music Dept.

The music cue sheet is very important to the composer and the publisher because it is used to calculate the amount of royalty payment each will receive once the show has been broadcast. For many composers working in television today, this represents the largest part of their income. Back in the good ol’ days the studio used to pay for everything. The studio would write individual checks out to the composer, the musicians, the music editor, the copyists, the mixers, and a whole host of other people. Then back in the 70s someone in charge of the money came up with the idea to package the whole music scoring process. This means that the studio now writes one big check to the composer, lets the composer pay for everything, and whatever is left over at the end is the composer’s to keep as his/her creative fee. That “one big check” is for a total that is substantially less than what all the individual checks added up to in the good ol’ days, so this means that unless the composer is willing to do most of the score on synthesizers to save on paying for an orchestra, his/her fee is greatly reduced from the good ol’ days. This is how it’s done in better than 90% of all TV scores and most low-budget or independent feature films. Fortunately for Alf, Fox has agreed to do it the old fashioned way on THE SIMPSONS so he doesn’t have to deal with being banker and composer all in the same week. 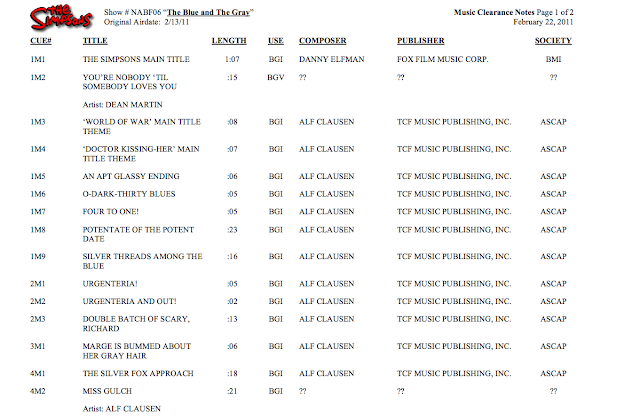 Above is a page of the cue sheet I prepared for NABF06 “The Blue and The Gray”. This sheet has just about every kind of cue that we might use in a episode. It starts with the Main Title. The cue played for 1 minute, 7 seconds (which includes the couch gag), was composed by Danny Elfman (who is a member of BMI), and is published (owned) by FOX Film Music Corp. which is a publishing arm of Twentieth Century Fox. The use column shows that this cue was BGI which stands for “Background Instrumental”, which means there was no singing and none of the music performance was seen on camera. In TV & film music, use is a big factor in determining the royalty value (how much the composer and publisher get paid) of a cue. Since I’m not a composer and don’t receive royalties for the music I can’t give exact dollar figures, but I can give you a general feel for how the royalties are calculated and paid. BGI is the type of use for better than 90% of all cues and its pay scale is average. The Main Title & End Credits of a show, even though they are BGI are considered the themes of the show and have a high royalty value. VV stands for “Visual Vocal” and means that the cue had an on-camera singing performance. This is also known as a “feature” performance and its royalty value is high. BGV stands for “Background Vocal”, another high royalty value “feature” performance. The cue with the least value is a BGI cue that is in the public domain that has been specially arranged for the show by the composer. Whenever we use, for example, “Battle Hymn of the Republic”, “Twinkle, Twinkle Little Star”, or any cues by dead classical composers like Beethoven, Mozart or Liszt, we do not have to pay any licensing fees to use the music. Alf Clausen receives credit as the arranger and Fox now owns this new version and recording of the piece. Alf & Fox each receive a small royalty for the performance.

DOUBLE Sidebar!: I’m updating this page in 2019 to tell you that “Happy Birthday” has been in the Public Domain for two or three years now. We can all use it as much as we like FREE OF CHARGE!

Next is 1M2 “You’re Nobody ‘Til Somebody Loves You” performed by Dean Martin. This is a licensed master recording. We used the CD of the music in the show. It played for 15 seconds as a Background Vocal. You’ll see that I did not include the Composer, Publisher, or Society information for this cue. On licensed masters, there is usually a long, winding trail of composers & publishers and rather than have me fill in the details on my cue sheet, I just fill those slots with question marks and the Fox Music Dept. will fill in the correct information. My sheet is not the final sheet. Fox will transfer all of my information into their computers, add to it the information for licensed cues, then generate a final cue sheet for the legal dept., ASCAP, and BMI.

The two performing rights societies in the U.S. are ASCAP (American Society of Composers, Authors, and Publishers) and BMI (Broadcast Music Inc.). Composers and publishers are members and the societies monitor the use of all copyrighted music performed in the U.S. Yes, I said all copyrighted music. Whether it’s heard on TV, movies, radio, elevators, live concerts, jukeboxes, cabarets, or restaurants it all gets counted and then the appropriate royalty is paid. ASCAP & BMI representatives hop in their car and listen to the radio and log what music is being played. They get ouf the car, go eat at a diner and log what music is being played over the sound system. The cue sheet I prepare helps ASCAP & BMI better track the performances of the cues in a TV episode. This way they don’t have to count and time each cue. They have all that information on the cue sheet and when the show airs it gets counted as one performance of each cue. When the show reruns, that counts as another. Then when the show goes into daily syndication around the world, it counts as a single performance in each market where it plays. There are nearly 200 markets (cities that broadcast a local station) in the U.S. alone. Add in the dozens of countries around the world and suddenly the performance count starts to grow exponentially. ASCAP or BMI total up all the minutes in a given episode, categorize each cue according to use and calculate the royalty due the composer and the publisher. There are other performing rights societies representing composers from other countries such as SOCAN in Canada and PRS in the United Kingdom.

All but one of the remaining cues on the sheet above were composed by Alf Clausen, are Background Instrumental cues, and are all owned by TCF Music Publishing, Inc. (Fox).

The last cue on the page is 4M2 “Miss Gulch”. In this episode we had a scene with Marge resembling the Wicked Witch of the West. We were able to license the cue from “The Wizard of Oz” that played in the scene when Miss Gulch first arrives at the Gale farm on her bicycle. Our music library, JoAnn Kane Music Service, was able to locate a copy of the original score from the film for us to use. This is one of those cases where we paid a sync license to use the music but not have to pay a mechanical license since we made our own recording. Fox owns the new recording we made but not the music contained in it. Neither Alf nor Fox will receive any royalties for this cue as it is still under copyright to another studio.

Sidebar: Composers are not employees of the studios for which they compose their scores. They are independent contractors and the music they compose is a “work for hire” which means that the studio owns all rights to the music after it is recorded. On low-budget productions a composer might be able to negotiate a partial ownership of the score in lieu of a higher fee. Publishing (ownership) is important because the owner gets to license the work out to other productions for a fee and also receives a share of any ASCAP or BMI royalty when the work is performed. Yes, young future composers, the studio owns your music and can re-use it any time and any way that they want.

Alf dreams up all the titles for the cues he writes. Sometimes he’ll call me the day before a scoring session to gripe that he doesn’t have enough time to write all the music. I insist that if he spent less time on clever titles, he’d probably save an entire day of composing! HA!

Well, if you’ve read all the way through all seven steps of Music Editing 101, congratulations! I’m impressed and grateful that you stuck with it. As we move ahead into season 23 I’ll be referring often to these steps and hope that you’ll feel a little more like an “insider” when it comes to creating and producing one of our scores.

As always, comments & questions are welcome in the comments section below.